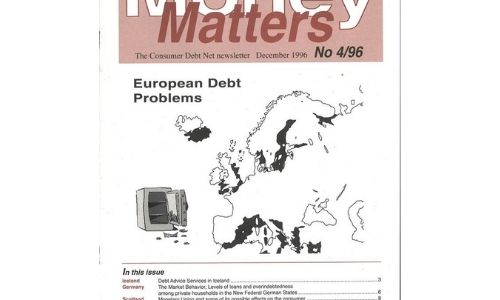 Did you know that the ECDN had a precursor in the 1990s and early 2000s called the CDN (Consumer Debt Network)? The network “shall deal with debt and budget advice, budget standards, household economic analysis, consumer and social problems due to overindebtedness. The purpose of the network was basically the same as our current ECDN. The CDN unfortunately went inactive after 2001, and no organisation represented the fight against overindebtedness until we, the ECDN, was founded in 2007. Even our magazine, Money Matters, was first started by the CDN, and we took it over once we were founded.

Due to good fortune, and with the help of Stuart Stamp, from Ireland, we have managed to obtain a number of these old issues of Money Matters running from December 1996 to December 2001. They have now been scanned and made into PDF-files, and for the next many weeks, we will be posting one of the issues each Thursday, for you to read and enjoy, and to teach us all what problems we faced in the late 90s and early 00s, and whether any of these problems have continued to this day.

We hope that you will enjoy!